I'm very excited to host Rayanna Jamison on my blog with her new book Collared.

Welcome Rayanna! I can't wait to read abut your book Collared.  I just love your cover... 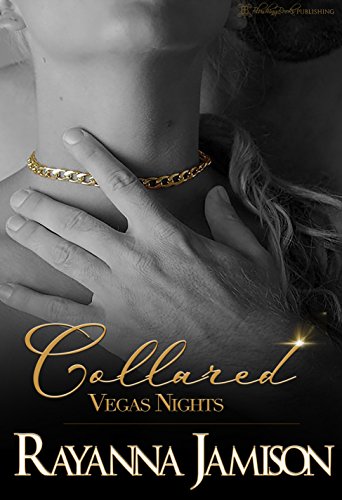 Diamond Barrett has spent the last four years hiding in plain sight, working as a show girl in Las Vegas, trying to forget the painful memories of her mother's untimely death. When the details of the gruesome accident finally surface on the morning of her 25th birthday, Diamond's pain leads her to a series of bad choices that result in the loss of her job.
Now what?
Paxton Donovan's very presence exudes dominance and captures the attention of everyone around him. He has spent years creating his brand as a business owner and professional dominant. There is no time for anything that interferes with the order with which he runs his business and life. Structure, order, rules, discipline. Business without pleasure. No distractions.
But nothing could have prepared Pax for Diamond as their two worlds collide and both of their perfectly ordered and quiet lives combust. Will their undeniable attraction and intense passion be worth the risk of pain and heartache as they shatter their safe lives?

“I don’t want to eat. Can you just tell me what you have to say? Do you have a plan to get my job back?”
Pax scoffed at her. It was actually a full on laugh. “No. Once Jason makes up his mind about something, it’s done. There’s no going back. Man’s as stubborn as a pack mule. At least when it comes to business decisions,” he added as an afterthought.
“Oh.” Diamond frowned, and picked up a piece of toast, nervously ripping the crust into tiny pieces.
“I need a new girl. We need some fresh meat to keep up interest and provide regular… entertainment.”
Her eyes blazed, and she dropped her toast, suppressing the urge to pick up her steaming hot coffee and throw it in his face. “I am not a whore! And furthermore, I’m not desperate. I have options you know, plenty of them.” She actually only had one that she knew of, but he didn’t need to know that.
Pax stood, towering over her. He looked about as angry as she felt.  “What are you talking about? Nobody called you a whore or even insinuated as much. You need to chill, girl. You might still be a little bit drunk or something, because you are making zero sense.”
“Oh yeah? Pax’s girls? Ring a bell? Isn’t that basically what you just asked me to be?”
His eyebrows crinkled high into his forehead, and he frowned. “Well, yes. But it doesn’t mean what you seem to think it means. I don’t think we’re on quite the same page here.”
“Oh, really? Enlighten me then.”
“Only if you dial back the attitude.”
“Fine.” It was her turn to cross her arms. She copied his stance from earlier and looked at him crossly. “I’m listening.”
“Rojo, if you didn’t know is a mild BDSM club with a focus on spanking. My girls dance the same as you did here. They don’t do anything else, other than serve the customers drinks and keep them happy and comfortable—and no, that doesn’t mean what you seem to think it means. The only difference is, well for one thing, I take care of my girls. Comped rooms, paid meals, monthly allowance, health insurance, all that jazz. I also pay better than Jason, but don’t tell him I said that. My girls also follow my rules. They keep a curfew, they eat healthy, they work out, and they show up on time. I keep them on a short leash. I want them in tip-top shape at all time. The kind of stunt you pulled last night would not be tolerated.”
“Right I get it. You’d toss me out on my ass—just like Jason is.”
“No. My girls mess up—they deal with the consequences. If you had been mine last night—and that was a regular occurrence—yeah, I’d get rid of you. You’d be a liability, and I’d have no choice. But unlike Jason, I pay attention to things like extenuating circumstances, and according to the things I learned from your file, coupled with the things I saw in yesterday’s paper—for you, last night certainly qualified as such.”
Pax was making it really hard to hate him the way she wanted to, and she kept waiting for the other shoe to drop. She couldn’t get past the idea that she was missing something. Something important.
“Thank you.” She was thankful for the kindness he was showing her, and the care he had apparently shown last night. “So, are you offering me a job?”
“On one condition.”
She stayed silent, waiting for him to continue.
“You’re tomorrow night’s entertainment. And that means, you accept the consequences for your mistakes last night. On stage. In front of a crowd.”

A bit about Rayanna...

Writing has been a passion of mine since I was 9 years old, and I always dreamed of becoming an author, but life happens and sometimes that first step seems like a giant leap. I credit a life changing move from the Oregon to Utah in the fall of 2013 as the catalyst that began my writing career.
I now reside in Southern Utah with my husband, my two children, two dogs, my mother, my 90 year old grandfather and a lizard named Leo.
I write what I love to read, which is fun romantic stories about submission in its many forms, and often joke that my stories get slightly dirtier with each one I write. When I am not writing, I enjoy my passions, which include cooking, drinking good coffee and good wine, shopping for crazy knee socks, celebrating with sushi for every occasion, and most of all spending time with my friends and family.