So glad to showcase Gideon today. It sounds enthralling. I'll let the blurb and the excerpt speak for itself. 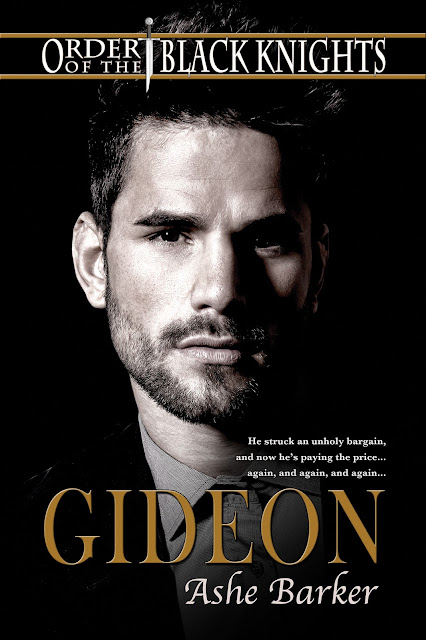 Order of the Black Knights
Every century has its knights, but they are not always seen. Some of them do what must be done—getting their hands dirty when no one else is willing. Assassins and antiheroes who work from the shadows, they are called the Black Knights. From the time of the society’s creation in the 1100s, these men are cursed to repeat their lives of bloodshed. But for each knight, there is one who can bring out the man that waits inside and break the cycle. The question is whether or not the knight will kill his true love before he figures it out.

Here is this book's blurb...

Gideon Maybury enjoys a life of wealth and privilege, not to mention the advantages his position offers him in his career as a merchant banker and in his less public life as a high-class, skilled, and very well-paid assassin for Her Majesty's government. When his brother dies unexpectedly, he becomes the Duke of Westmoreland.

Michael Mathison has hated Gideon since they were at university together. He’s convinced Gideon had a hand in the death of Michael’s college lover, Christopher, and that he had something to do with the death of his own brother. So he gets a job as Gideon’s driver, enabling him to investigate the circumstances surrounding the death of the elder Maybury sibling. At first his suspicions seem to be confirmed, but clues come to light that suggest all is not as it appears at Maybury Hall.

As the mystery deepens, so does the attraction between the two implacable enemies. Each has reasons not to trust the other, but neither is averse to a bit of kinky play. Gideon and Michael end up owing each other their lives, and it results in consequences neither could have imagined.

Heres where you can get it...

Read Chapter One for free

Gideon Maybury stood in the front pew and gazed straight ahead. Behind him half the aristocracy in the country and plenty from farther afield had gathered to pay their last respects to his brother, the late duke. Their heads were bowed, their voices hushed as they repeated the amens at the required junctures. The Bishop of Carlisle had been prevailed upon to lead the service, though Gideon’s sister-in-law had insisted it take place at the Priory Church in Cartmel rather than at the cathedral. Lydia set great store by family tradition and history, and as the Priory Church was founded in 1190 by her ancestor William Marshall, the first earl of Pembroke, she saw no justification in going elsewhere for such a momentous occasion.
Gideon let her have her way. It made no difference to him. His brother was gone and would soon melt into the annals of history, forgotten by all but his closest family. Richard left a distraught widow, but no children. So Gideon was now elevated to the lofty status of twelfth Duke of Westmoreland.
It had been that easy.
Lydia, his sister-in-law and, he supposed, the dowager duchess of sorts, sniffed at his side. Gideon produced a beautifully embroidered handkerchief from the pocket of his stark black suit jacket and handed it to her. She took it with a grateful but somewhat watery little smile and dabbed at her nose. Her movements were delicate, and her long, slender fingers appeared fragile as she struggled to contain her grief. Gideon knew it to be an illusion. Few people in his acquaintance were tougher than the lovely Lydia, though her sudden widowhood had dislodged even her usually unshakable composure.
Gideon had a lot of time for Lydia. He liked her, and more importantly, he respected her. Lydia Maybury was a lawyer. The firm where she was a partner dealt mainly with corporate clients, because that was where the serious money was to be had, but they would make occasional forays into the murkier world of criminal defense when something interesting—or lucrative—came up. She had been married to his brother for almost five years, and they’d been disgustingly happy together, though that came as something of a surprise to Gideon. Lydia always struck him as too tough and uncompromising for the soft-hearted, affable Richard—or so Gideon thought when they announced their engagement. He had expected them to separate within a year, but he’d been wrong.
Their union turned out to be a happy example of opposites attracting. Gideon was amazed, but dismissed the picture of domestic bliss as an aberration. He performed his duties as best man at their wedding, made a few crude jokes, cultivated some useful contacts among the gathered dignitaries, left Richard and Lydia to bask in a mutual adoration that he found somewhat sickly, and returned to his own, rather stellar, career in merchant banking.
Five years later he was back in the same church where his brother and Lydia were married to play his part as chief mourner.

A bit about Ashe Barker...

Where you can catch up with her...