Guess who I have on today? Delia Grace, with a sneak peak into her first ever publication Beautifying Bernadette!

Delia's first book has done amazingly well and I'm so happy for her. Here's a bit more about her book and a sneak peak. 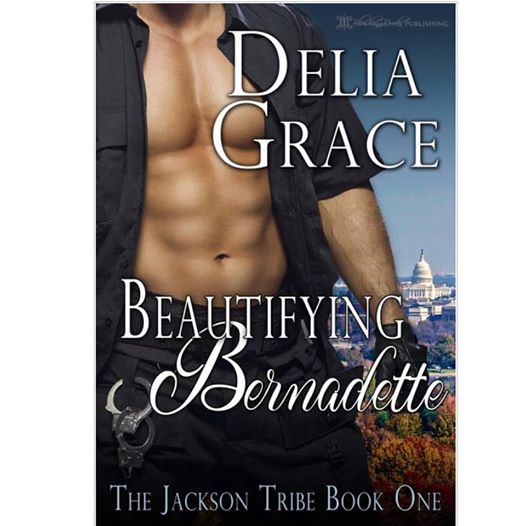 
Bernie Douglas has spent her entire life feeling inferior. She has never been the perfect weight, had the perfect IQ, or caught the perfect guy. She has always been surrounded by beautiful people, high achievers and success, but she herself has decided she is destined to settle for her own mediocrity. So the day she is pulled over as she tries to multitask while driving, she isn’t truly shocked. However, the moment she meets the eyes of the policeman standing outside her car window, her entire life is turned upside down. Bernie knows that Officer Levi Jackson is everything she is not; handsome, successful, and has the Midas touch. Everything he touches seems to flourish, and yet Bernie cannot accept that he truly wants her. No matter how she fights against his hold, she finds herself falling more and more in love with his overwhelming dominance and tender care.Levi comes from a tight-knit family, his parents and siblings giving not only encouragement and support to one another, but helping those who come to their camp to learn that they are not worthless, that they all can fulfill their dreams. After a routine traffic stop, unable to stop thinking about the feisty, curvy woman behind the wheel, he learns that she wasn’t quite as honest with him as she’d promised. Despite her bravado, he sees a woman who is uncertain, not only about her physical appearance but about her very worth. He wants nothing more than to hold her close and teach her that she is exactly what he has been searching for his entire life… even if he has to hold her over his knees and redden her rear until she knows how very much she is loved.Will his patient encouragement and consistent discipline be exactly what Bernie needs to get out of her rut? Or is she truly too broken to be of any use to anyone?DISCLAIMER: This book contains the spanking of adult women and sexual scenes. It also deals with the desire to self-harm in the form of cutting. If any of these themes offend you, please do not purchase.

"But it’s my turn again and I have a doozy for you…” Bernie’s tummy turned, “doozy” sounded exciting, she glanced down at her plate and realized she’d been so into talking and listening she had eaten her entire omelette. Grabbing a piece of turkey bacon to gnaw on, she said, “Hit me!” Levi’s eyes twinkled.
“Funny you would put it that way…”
Bernie’s stomach fell and she set down the bacon. She had an inkling where this was heading, and it wasn’t a place she was sure she wanted to go. Levi stared at her intently for a long moment before continuing in a conversational tone.
“Why did you tell me you were married and pregnant when you obviously are neither? And, where on earth did you get the crazy idea to say you would get spanked for a ticket? I’ll be honest, Miss Douglas, that is not an excuse I have ever heard as a reason for me to forego ticketing someone.” Bernie started playing with her napkin, ripping it into little, teeny, tiny, pieces.
Levi waited patiently and, when he could tell she was not going to speak, he gently leaned over and tapped her chin with his finger and said in a gentle tone, “I asked you a question, Miss Douglas. I am not mad, but I genuinely need to know your answer.”
Bernie swallowed and looked deeply into his eyes. “I… I don’t know. It just fell out. Probably because I wish it was true. I wish I had someone waiting at home to spank me for stupid choices and to hug away the pain and make me feel better and help me stop being such an idiot… and great! Now you’re going to know I am a freak. Freaky Bernie who wants her ass paddled.” Hot, angry embarrassed tears rolled down her cheeks and she couldn’t look at his face, but he grabbed her hands and squeezed. “Bernadette, you are not a freak. Not in any sense of the word. You are an incredibly attractive, interesting funny woman who I have been envisioning tossing over my knee and taking my hand to her bare butt for over three months,” he said seriously.
Bernie looked up in shock, mouth wide open, so shocked the tears stopped flowing. “Yy-you what?” Levi started laughing at her expression and nodded.
“If you’re a freak, then I am even more of one. Try being a cop whose job is to serve and protect and having to explain to people that your proclivities in protecting women also lead you to want to paddle their behinds until they are crimson red.”
Bernie couldn’t believe her ears. She just… couldn’t. “You like to… you like to sp-sp… discipline gir-people?” She stammered out.


Levi shook his head. “Not just any people, and not just any girls either. I don’t go around swatting random ladies’ behinds or anything. To be honest, I haven’t spanked anyone in years, but, ever since that traffic stop, I’ve been dreaming about taking you in hand, Miss Douglas. Not just ‘some girl,’ but you specifically—with your curvy ass and your sassy smile and your amazing body.” He knew he was crossing all sorts of boundaries about what was appropriate, but he felt like he needed to just be as open, honest, and frank as he could be. “I want to talk you through all of the bad choices you made, not the least of which was lying to my face and then perpetuating the falsehood in the courtroom, and then expose your bare bottom, pull you over my knee and start spanking your bottom with my hand. For a long long time. Until your ass and thighs are the color of that hot number you had on last night. Then I want to stand you in the corner—on display—to think about your choices while I just watch and take in the sight.”

A bit about Delia Grace...

Delia Grace is a mid 30's hopeless spanko and voracious reader. Married for over seven years to the first man who ever dated, spanked, kissed, or etc etc her (in that order - wink wink) she is grateful to have a real-life fairy-tale and knight in shining armor to use for inspiration in her writing. She has spent her entire life within an hour of Washington, DC, but loves to travel and meet like-minded individuals and uses all of her spare time and funds to do just that.
Posted by Unknown at 12:00 AM