Today I had another visitor! Sara Field's stopped by with A Gift for the Commander!


Today Sara is here with her new release A Gift for the Commander. 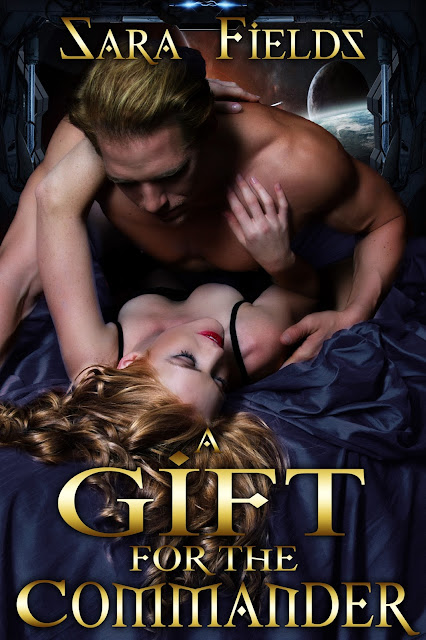 Though Olivia is grateful to be alive after she is rescued from a terrible tyrant and brought to the planet Terranovum, she is none too pleased when she learns that she is to be auctioned as a slave to the highest bidder. But before she can be sold, she must be trained, and the man who will train her is none other than the commander of the king’s army.

Wes has tamed many human slaves and when Olivia resists his efforts to bathe her in preparation for her initial inspection, he strips the beautiful, feisty girl bare and spanks her soundly. The stern chastisement leaves Olivia tearful and repentant yet undeniably aroused, and Wes starts her lessons in submission by making her beg him shamefully for the release her body needs so badly.

Once she has been thoroughly and intimately examined, Olivia’s training begins in earnest, and Wes takes her to his bed to teach her what it means to surrender her body to a dominant man. But try as he might, he cannot bring himself to see Olivia as just another slave. She touches his heart in a way he thought nothing could, and with each passing day he grows more certain that he must claim her as his own. But with war breaking out across Terranovum, can Wes protect both his world and his woman?

Without hesitation, she obeyed, and her senses amplified. Her sight taken away from her, all she could do was feel and listen for the next fall of the crop. The entire experience was more than intense, it was magnificent. He moved silently, so that she didn’t know when he was going to catch the underside of her bottom cheeks, or her breasts, or the sides of her hips, or the backs of her thighs. Her chest rose and fell, and she cried out when he tapped the leather against her nipple, but her reaction wasn’t from the pain, it was from the rampant desire that coursed through her. He did it again, over and over, switching back and forth from one nipple to the other.

Her thighs began to quiver, and he dragged the crop down between her breasts to her navel, and then even lower, until the tip of the crop lay over the top of her clit.

She stopped breathing. Time seemed to slow as he took the crop away from her pussy. Expecting a sharp slap to fall at any second, she breathed a sigh of relief when he brought it back down gently. He did this a few times in a row, and she finally relaxed. Her clit throbbed in anticipation, and she could hardly contain herself, her lust was so great. Just when she had grown comfortable, he pressed the crop firmly against her. And then he took it away again.

The slap was still gentle, but harsh enough that she cried out, in either pleasure or pain, she wasn’t sure. He did it again, and her hips rolled wildly forward. He pressed his body up against her back and grabbed a fistful of her hair, arching her backwards even farther. Her scalp burned, but it only added more fuel to the fire. Her entire body smoldered red hot, aching with need for release. She panted as he pulled her head back so far that it nearly rested on his shoulder. She moaned when he reached around her body and settled the crop back on her clit.

“You are not to come until I give you permission. Do you understand?”


If you haven't checked out Book 1 and 2 in the series,
here are the buy links below!!!