Today I am honored to have Maggie Carpenter here with me to share her new book Tucker's Justice (Wild West Cowboys Book 1). 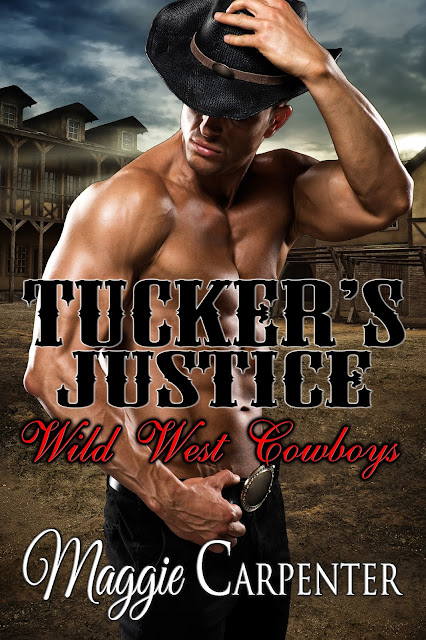 
When hardened gunslinger Tucker Prescott is tasked with bringing law and order back to a town overrun by a gang of criminals, he quickly realizes that his biggest challenge won’t be the villainous McGill brothers. The one who will truly put him to the test is Dolly Baker, the beautiful, feisty twenty-two-year-old daughter of the man who hired him.

From the moment she barges into his cabin uninvited, Tucker knows Dolly is going to be trouble, and it isn’t long before she tests his patience one time too many and earns herself a sound spanking. The embarrassing chastisement gets her attention, but it will take quite a bit more than a few smacks on the bottom to teach her obedience, and the more he sees of Dolly, the more Tucker is forced to admit that he would love to be the man to properly tame her.

Tucker didn’t come to Spring Junction to keep a woman in line, however, he came to deal with the McGill brothers and their gang. He has a plan to do just that, but it will depend on his quick wits as much as his quick draw, and despite his best efforts Tucker can’t get Dolly off his mind. Can he bring the outlaws to justice and make her his bride before she drives him to distraction?

Upstairs in her bedroom, Dolly had locked her door, taken off her dress and drawers, and wearing just her corset, chemise, and stockings to her knees, she holding the hairbrush and peering over her shoulder at her bottom in the mirror. It still showed faint red blotches from when Tucker had last spanked her. The sight sent her belly fluttering, and holding the brush over her right cheek, she held her breath and landed the blows.
“Ow, ow,” she hissed, sucking the air between her teeth and stamping her foot. “No fair you making me spank myself.”
She now understood why he’d instructed her to make the swats fast and hard. If she’d taken her time she might have held back after the first or second, and delivering them swiftly removed the temptation. Gazing at the red bloom, she took the brush in her left hand, but before landing the second set of four she paused to rub the sting.
The whole punishment thing was strange; not that her father hadn’t punished her, he had, but he’d never spanked her. Maude had landed a slap or two, not a real spanking, but what she felt when Tucker smacked her, or threatened to smack her, was completely different to anything she’d ever experienced. It made her stomach flip and sent a pulsing excitement through her entire body.
Taking a deep breath, she sent her pondering to the back of her mind and launched into the next four swats. As had happened previously, they didn’t carry the same amount of zest, so she added a fifth. The moment it landed she asked herself why she would do such a thing, but suddenly feeling weak and needing to lie down, she stepped across to her bed and flopped onto her back.
“Ooh, what’s wrong with me?” she mumbled. “I want him, that’s what’s wrong with me. I’m twenty-two years old and I’ve never been with a man. I’m glad I waited, but now I don’t want to wait a second longer.”
Sending her fingers against her pussy, she found herself warm and wet, very wet. Did spanking feed her desires? Did his authoritative ways arouse her? She knew they did, but she didn’t know why, then decided the why didn’t matter. Closing her eyes, she imagined him lying next to her, rubbing her breasts, tonguing her nipples, and exploring her womanhood with his fingers.
“I can’t wait,” she whispered. “I positively cannot wait.”

Here's where you can get it...

A bit about Maggie...

Male dominance/ female submission. My passion. It is that which I write about, and my alpha-males range from down-home, hunky, spanking cowboys, to fantasy, sword-wielding, warriors, and of course, artful romantic Dominants who don't need dollars to melt their sweet subs, (even if a few of them have mega-bucks).

There's a little bit of me in all the stories, and The British Bachelor trilogy is based on a long-distance relationship I had with a British Dominant, James Collier. When he agreed to work with me on I AM A DOMINANT, I was absolutely thrilled. This book is a first-hand account of some of his more interesting experiences, including the amusing, and intriguing story of the first time he had a woman over his lap.

I am an old-fashioned romantic, complete with my own white knight fantasies, so a red rose and heart-felt sentiment is alive and well on the pages of all my novels. If you like to sigh, please, come on in.

Last but not least, I am blessed to share my life with a precious pup, and a gorgeous mare. All creatures great and small also live close to my heart.