Oh my this book looks HOT! The Billionaire Beach:Shark Fin by Maggie Carpenter on my blog today! 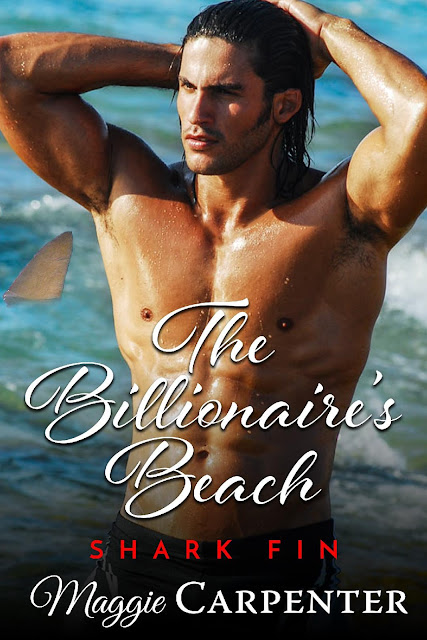 Avery Madison, a farm girl from Montana and struggling interior decorator, has been trespassing on a private beach as payback for a broken promise.

For weeks billionaire Dean Guthrie has been irritated by a young woman disrupting his solitude, and finally catching her he pulls her over his knee. Infuriated she marches into the water not noticing the menace lurking in the shallow depths.

Dean's frantic shouts of warning send her racing back to the sand, and barely escaping the jaws of the great white she falls into his arms at the water's edge.

Moments later he recognizes the dark-haired green-eyed beauty. At a chance meeting months before she'd begged him to look at her ideas for his house. Though he'd agreed and was eager to see her again the portfolio had failed to appear.

They realize conniving forces must have interfered, but who, and why? As smoldering passion ignites, more questions surface as they are faced with a mysterious spate of nasty misdeeds.

Does someone want to keep them apart, or are Avery and Dean in serious danger...?

A menace lurks and romance flames in this sexy romance. If you enjoy mystery and suspense with take-charge alpha male and feisty female, you'll love The Billionaire's Beach. Grab your sunscreen and click the link today. 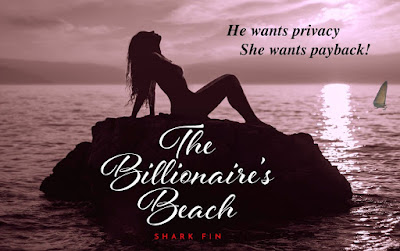 EXCERPT:
A ripple of something indefinable was moving through his body. He’d wronged her, but who was she, and what had he done?
“This isn’t about me owning this property,” he exclaimed. “Tell me, dammit. What’s going on with you?”
“I’m leaving, that’s what’s going on with me,” she snapped, and turning away she hurried towards the water, but to his surprise she abruptly stopped, spun around, and glowered at him. “I’m glad I was irritating, I’m glad I messed with your perfect little world,” she shouted. “Maybe I was wrong to trespass, but you deserved every aggravating moment, and I might have a sore backside but it’s worth it. It’s time you did some thinking…asshole!”
As she stormed off a second time, he stared after her in complete disbelief. The bikini-clad, beautiful young woman had been the source of ongoing irritation for many weeks, and he’d done what came naturally.  He was a dominant, spanking was as inherent as breathing, but had he acted too quickly? Clearly there was more to the story, but why hadn’t she told him? He thought about chasing after her but changed his mind. She was in a state, and he wasn’t feeling particularly happy either. Striding across to the staircase he punched the code into the gate keypad and started up the steps. His habit was to take them two at a time for exercise. He’d been tempted to put in an electric chair, but he liked the forced workout.
“Avery Madison,” he muttered. “I’d remember that name, but her voice, I know her voice, dammit.”
She had a knock-out body, but how could he recognize any woman wearing such large dark sunglasses? Any time he’d studied her through the telescope they’d covered her face. Had it been purposeful? Had she deliberately been hiding behind them so he wouldn’t recognize her?
“Dammit. I should have made her take them off. What’s wrong with me?”
He couldn’t abide sand in his house, and before entering he made it a point to clean it off with a brush he kept hanging on the railing. As he swept his feet and legs he continued pondering, and moving inside he headed up the stairs to his bedroom. As he dropped his clothes into the bathroom hamper, and washed his hands and face, the young woman’s attitude and words continued to weigh on his mind.
“We’ve met,” he mumbled. “I can feel it, and I know your voice. It’ll come to me. Once I calm down, it’ll come to me.”
Quickly dressing in comfortable slacks and a thin v-neck cashmere sweater, he moved swiftly back to the kitchen and filled a mug with coffee from his built-in coffeemaker. Curious to see if she’d left he carried the hot drink outside to the deck, and walking to the railing he stared down at his beach. To his surprise he saw her standing thigh-deep in the water. The baseball cap was gone, and her long dark hair was flirting with the wind. The sun, huge and low on the horizon, was sending a myriad of colors across the sky and sea. The sight was breathtaking. It was a photograph waiting to be taken.
Hurrying inside he grabbed his phone, moved quickly back to the railing and framed the shot. He snapped the picture, and as he stared at the captured image he felt a strange stirring in his soul. He glanced down at her, and to his surprise she turned around and gazed up at him. Had she felt his eyes on her? The moment felt almost ethereal, and impulsively he raised his hand in a simple wave. As she briefly lifted hers in response, he wanted to run down the stairs and pull her out of the water. Without those damn sunglasses he’d know her, he was sure of it, but she had already turned back to face the sea and was moving slowly forward.
“I’m going to have this printed out,” he mumbled looking back at the photograph, then seeing what looked like a speck of dirt on the glass he brushed it aside.
It didn’t move.
He enlarged the image.
A shard of panic sliced through his being.
It was a shark’s fin, and it was perilously close to shore.
It was perilously close to her.
Author Info:
Award-winning and best-selling author Maggie Carpenter has published over fifty romance novels, and is the recipient of a number Spanking Romance Reviews awards spanning a variety of genres. Her readers describe her work as, romantic, funny, suspenseful, beyond a five-star read, exciting romance with a ton of surprises.

Her work includes a best-selling twelve-book contemporary cowboy series, Cowboys After Dark, (http://amzn.to/2ihCNtp), a warrior fantasy trilogy, Warriors After Dark, (http://amzn.to/2iE0cDa) contemporary love stories, and several Victorian romances. His Willful Bride was a #1 best-seller for several weeks and a BookBub Feature Deal. She is best known for her smart, witty, strong-willed women who bring unexpected challenge, mystery and humor into the lives of passionate, dominant men.

Maggie has a history in show-business both in front of and behind the camera, but moved from Los Angeles to live in the Pacific Northwest to pursue her writing. She is an equine enthusiast who rides every day, and writes until the wee hours of the morning when her eyes close only because they must.