Addison Cain is on my blog with Stolen!

Stolen is the first in a series by Addison Cain. (Alpha's Control-Book 1) 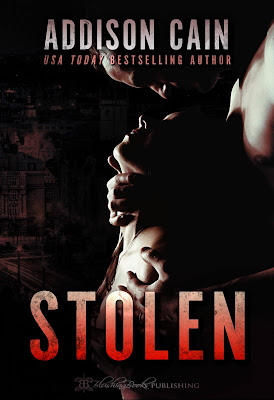 Blurb:
He stole her off the streets in broad daylight—the first Omega discovered in Bernard Dome in generations. He took her with violence while none intervened. He broke her, swearing he’d put her back together.
Brenya Perin was ordered to submit.
Bernard Dome is the jewel of Europe, a bastion of art and culture, pleasure and decadence. But life in the city depends on the occupation chosen for you at birth. There is no subversion, no question of who rules. There is no freedom.
Peace has a price, a price the Commodore of Bernard Dome is willing to pay… so long as the Omega remains his.
***
Shepherd’s influence is on the rise. His machinations are subtle, his hands full tending to his recovering mate. Her safety is his priority, and something he’s willing to risk war to assure. Bernard Dome has what he wants, and they will all be damned if they deny him.
Publisher’s Note: The Alpha’s Control series, is a dark Omegaverse tale with explicit sexual themes and complete power exchange. If such material offends you, please do not purchase.

Bit by bit, her body conformed to the Alpha’s unspoken will. Her lips would sigh while her brain would scream.

He’d take a nipple to be suckled, her spine would arch… the small Beta voice inside her powerless to make her listen.

Someone else inhabited her body when Jacques played his games.

Because he had a new weapon. A thing he’d slipped inside her and called her prize.

What did he call it? The name had sounded scientific, important, nothing like what it should have been called. He’d called it a pliarator. She knew better. It was a mind obliterator.

It slipped in easily enough the day before, so smoothly she wasn’t sure what had replaced his fingers, and then it had latched on. Discomfort grew in the form of a muscular ache, distracting, embarrassing, and enticing, Jacques manipulating how the thing sat in her pelvis while she tried to sit up and see what he’d done.

There had been no warning before the buzzing clicked and a soft nodule landed on her clitoris. The vibration had set her to yelp, urged her to press her legs closed against it, and encouraged a pool of slick to gather under her body.

He’d allowed her rebellion because it had made no difference. Even with her legs together, even rolled over on her belly as if she might squirm away, it could not be unseated. Deep inside her body it changed shape again. It stretched her, Brenya keening in pain.

Except, she wasn’t sure if it had been pain at all.

A warm hand on her back, the other still fixed to the device inside the squirming Omega, Jacques smiled. “When an Alpha male chooses to mount an untried Beta female there is a certain protocol that must take place before he can possess her. Had you been optioned for the breeding banks, you would have undergone this practice years ago—just as Annette delighted in these moments with Ancil. Sharing this with you was her idea, and seeing you this way, I can see it was an excellent one. Relax and enjoy.”

Mouth agape, sucking in deep pants of air, Brenya stared forward at the distant wall and saw nothing. She could do nothing. Was reduced to nothing.

All by a single pulsating machine.

A machine designed for one purpose: to prepare a Beta female's sex organs to accept the far larger, far more powerful Alpha cock.

The way it squirmed and milked the slick from her tunnel curled her toes. The horrid thing had a life of its own, though she might claw the sheets and fight against its intrusion.

Jacques may have pumped it in and out of her, he may have forced it deeper into her cunt when she tried to push it out, but the robot sensed her struggles and redoubled its attack.

The first orgasm had hurt; the machine had torn the pleasure right out of each nerve.

Immediately it altered its shape, sprang into action when her passage clenched as if to grasp an Alpha knot. Shape bloating, manipulating nerves with shocks, with rotary aggression, it had expanded near the base… and made her groan until drool hung from her lips.

An ocean of slick poured like a river, Jacques no longer pinning her down, but petting and watching where her ass had raised up from the bed and her stuffed cunt was on display as if begging for more.

He adjusted the settings. She convulsed, insides wrenching around the mechanical intrusion as it started its expansion process over again.

Rolling her to her back, he drew her knees to her ears, put his weight on her, and moved his body as if it was his member inside her doing the damage and not some cold machine.

He’d dared to kiss her, to comment on her lust-drugged, blown pupils.

The male had called her beautiful as she lay stupefied and twitching.

When she tried to say his name, tried to beg him to stop, he’d smiled, his head slowly descending between her grotesquely spread thighs. Jacques had lapped at the slick seeping out around the machine as if her sex was the sweetest cream.

“I’ve never seen a Beta respond to a Pliarator as you do. What exceptional creatures Omegas are.” Husky, he’d growled, still savoring her juices. “Imagine it’s my cock inside you. When the next knot comes, I want you to feel my seed pulsating in your belly.”

As if on cue, the machine began to expand at its base, to fill her up and stretch her even more than the first time. He watched it work her, Jacques seeing to his own satisfaction with rapid jerks of his hand up and down the veined protuberance jutting forth between his legs.

She could smell it in her haze, grunted at it like an animal.

The way he abused his organ, how swollen and purple it grew in his fist, the way he practically gnawed her erect clitoris, they both had to be in euphoric pain.

Ready to spurt, he’d reared back on his knees, drew his lips back from his teeth, the muscles standing up in his neck.

The worst had yet to come.

He spoke a command. The machine responded. It opened up, the false knot inside her growing until a hole was made inside her body just the right size to be exploited.

Falling forward to land on his hand, his musculature tight and twitching, Jacques lined up his fat cockhead with her machine spread opening, smeared her tortured cunt with a dribble of his come, and jerked himself in two more rough tugs until pearlescent spray shot forcefully into the space the machine had made inside her.

His usherings were too much for that little pocket, and his seed surged outside her sex, down her crack, in waves of wet heat, over and over until he pulled from her slit to aim instead for her trembling belly.

He overshot, coating her heaving tits, globs landing as far as her parted lips.

When he had crawled over her body, bobbing his pulsating knot in her face, he’d told her to lick him clean… and she had obeyed.

Laving him from bulbous base to mushroom tip, collecting the salty taste, slurping, swallowing. With even more vigor than he’d displayed between her legs, Brenya submitted.

In that moment, she did not possess the mental faculty to understand that the Alpha had manipulated his promise.

Jacques had not fucked her. His machine had.

She’d been vanquished like a prisoner, subjugated like a slave, and used like a whore—sore, tired, mindless, and still under the control of his whirring device.

That had been last night, all night.

Even upon waking, her senses had not fully returned, and here he was, forcing her back on the bed to do it to her all over again.

He pushed his toy deeper, speaking warmly. “In a week or two, you’ll be ready for me, mon chou.”

A bit about Addison...

USA Today Bestselling author, Addison Cain, is best known for her dark romances, the internationally bestselling Alpha’s Control Series, and the twisted alien worlds of the Irdesi Empire. Her antiheroes are not always redeemable, her lead females fierce, and nothing is ever as it seems.Deep and sometimes heart wrenching, Addison is driven to push her plots beyond the pale. Her books are not for the faint of heart, but they are just right for those who enjoy unapologetic bad boys, aggressive alphas, and a hint of violence in a kiss. Visit her website:addisonlcain.comDon’t miss these exciting titles by Addison Cain!The Alpha’s Claim Series:Born to be Bound: Book OneBorn To Be Broken: Book TwoReborn: Book ThreeThe Alpha’s Control Series:Absolute Power: PreludeStolen: Book OneThe Irdesi Empire Series:Sigil: Book OneSovereign: Book TwoAnthologies:The Dark Forest: A Collection of Erotic FairytalesValentine’s Roulette: UnraveledHero Undercover: A Night by my FireRoyally Mine: ConsumedHistorical Romance:A Trick of the LightDark Side of the Sun
Posted by Unknown at 12:00 AM