My feature today is Ashe Barker's Held In Custody. 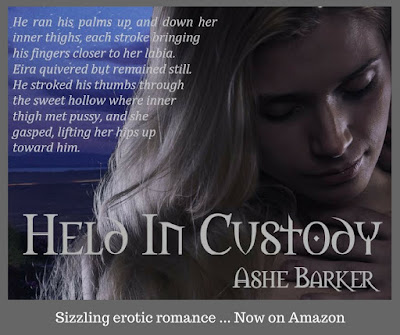 When he encounters an injured young woman while on a motorcycle ride on the small Scottish island of North Uist, police officer Finn Olsen immediately comes to her aid, but to his surprise her dialect proves all but incomprehensible to him. To make matters worse, she first tries to run and then does her best to stab him with a dagger after he catches her.

Recognizing that the woman is confused and distraught, Finn disarms her, handcuffs her, and brings her back to the local police station, which doubles as his home. Once she is in his custody, however, it quickly becomes clear that his beautiful, feisty prisoner comes from a very different era, and that she has somehow travelled forward in time more than a thousand years.

Finn takes it upon himself to keep the headstrong girl safe in a completely unfamiliar world, even going so far as to bare her bottom for a sound spanking with his belt when she attempts an escape. Despite her situation, she is deeply aroused by his bold dominance, and when he claims her properly she is left utterly spent and satisfied. But as they unravel the mystery of her arrival in the twenty-first century, will their discoveries bring an end to their newfound romance?

Publisher’s Note: Held in Custody includes spankings and sexual scenes. If such material offends you, please don’t buy this book.

He had no intention of touching her. His job is to protect the community of North Uist in the Outer Hebrides so Police Sergeant Finn Olsen is not about to let some strange woman run around his island brandishing a knife almost as big as she is. The mysterious female soon finds herself Held In Custody, locked up for her own protection. And his.
She is a prisoner in his care, but the more he learns about his unusual captive, the more Finn begins to suspect all is not what it seems. Eira speaks a language long dead, has no idea about modern plumbing, and seems to think he’s a god!
Punished for attempting to escape and putting herself in danger, Eira soon learns that the stern man who has her in his power intends to keep her safe but he expects obedience. Confused, lost, alone, she has no choice but to trust him as her world is thrown into turmoil. But when faced with a menacing threat from the past can Finn protect her? And can they forge a new future together?

Read Chapter One for Free

He patted his lap and waited for Eira to resign herself to the inevitable. It did not take long. Eira edged forward from the head of the bed and eventually threw herself face down across his knee.
Finn lifted the towel to reveal the curved perfection of her bottom. He had, of course, had occasion to admire her body in the shower, though between the T-shirt and his own annoyance that opportunity had been limited. He took his time to savour her now.
Eira flinched when he laid his palm on the soft, tender skin of her buttock. He squeezed, then reached for the belt which he had laid beside him on the bed. Finn took the precaution of hooking his leg over both of hers to ensure she remained in place, and with his spare hand he held her wrists in the small of her back. He usually derived considerable pleasure from taking his belt to a willing woman and he was only marginally less enthusiastic about administering a decent disciplinary spanking. Now that he had Eira laid across his lap, waiting, he was ready to admit that this was where he had wanted to see her right from the moment he had set eyes on the woman on the road. Even so, he thought it best to get this done with quickly. It was late, they both needed to get some sleep.
Eira yelped when the first stroke landed. She wriggled and squirmed on Finn's lap but he held her fast. After a few moments she settled and he delivered the second stroke. This time she whimpered but did not struggle. The third and fourth strokes were met with first screams, then sobbing. By the fifth she lay limp, weeping, her bottom sporting five vivid crimson stripes.
Finn laid the belt aside and traced each red wheal with his fingertips. He was gentle, but she hissed with pain even so.
"I am sorry, " she gulped. "I will obey."
"I know," murmured Finn. "I know you will. And now, you know what will happen if you don't."
"I am sorry, also, for the knife."
"That's done with, I told you. It doesn't matter."
"I am sorry, even so."
Finn eased her to her feet, then held her elbows until he was sure she was steady. "All is forgiven. You have been punished and we will not talk of it again, the knife or you disobeying me." He pulled her to him in a hug then smiled up at her. "You must be tired. It is very late. I made a bed for you."
"I know, in the prison."
"No, not there. In another room. You can use it until you have somewhere else to stay." He stood up and held out his hand. Eira took it, and he led her from the room.
"This is for me?" She gazed at the small but perfectly serviceable spare bedroom.
"Yes. You can sleep here. I'll bring your clothes when they're dry but until then you'll have to borrow more of mine."
"May I stay with you?"
"What?"
"May I sleep in your bed? With you?"

USA Today best-selling author Ashe Barker has been an avid reader of fiction for many years, erotic and other genres. She still loves reading, the hotter the better. But now she has a good excuse for her guilty pleasure – research.
Ashe tends to draw on her own experience to lend colour, detail and realism to her plots and characters. An incident here, a chance remark there, a bizarre event or quirky character, any of these can spark a story idea.
Ashe lives in the North of England, on the edge of the Brontë moors and enjoys the occasional flirtation with pole dancing and drinking Earl Grey tea. When not writing – which is not very often these days - her time is divided between her role as taxi driver for her teenage daughter, and caring for a menagerie of dogs, tortoises.  And a very grumpy cockatiel.
At the last count Ashe had over forty titles on general release with publishers on both sides of the Atlantic, and several more in the pipeline. She writes M/f, M/M, and occasionally rings the changes with a little M/M/f. Ashe’s books invariably feature BDSM. She writes explicit stories, always hot, but offering far more than just sizzling sex. Ashe likes to read about complex characters, and to lose herself in compelling plots, so that’s what she writes too.
Ashe has a pile of story ideas still to work through, and keeps thinking of new ones at the most unlikely moments, so you can expect to see a lot more from her.
Ashe loves to hear from readers. Here are her social media links:
Newsletter sign-up
www.ashebarker.com
Facebook
Twitter
BookBub
Instagram
Pinterest
Goodreads
Or you can email her direct on ashe.barker1@gmail.com