Guess who's over at my my place? Jane Henry and Maisy Archer with their new cowritten book Her Protector!

I am so pleased to have both Jane Henry and Maisy Archer here to talk about their new book Her Protector (Boston Doms Book 3). 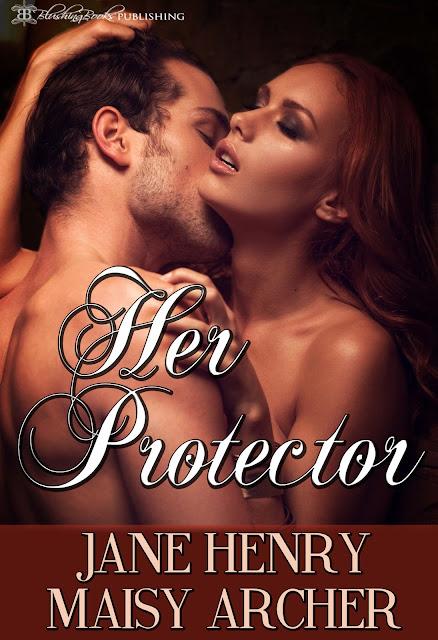 
Tony Angelico thinks he knows all about Dominants and submissives. After all, his two brothers are unapologetic Dominants with long-term submissive partners. Tony also knows that Tessa, the woman who works for him… the one girl he can't get out of his mind… is interested in the lifestyle. But he wants no part of bossing women around, let alone dominating them.

Tessa Damon craves the attention and discipline of a strong, dominant alpha male, but she's not been able to find what she's looking for. She's attracted to Tony, and can't help fantasizing about being taken over his knee for a sound spanking. She longs for the release and comfort of submitting to a man she can trust.

The night Tony decides to give it a shot, everything changes. But can Tessa be healed from her abusive past, and find that she's worthy of love? Can they find a path that works for both of them? Will Tony finally understand that there is no one definition to cover every nuance of what being a Dominant means – not when his heart and soul know that he wants nothing more than to assume the role of Tessa's protector?

“Tell me what you need,” he said, his voice so gentle, it seemed almost ironic he was talking about spanking her. His gentleness made the tears threaten to fall again, her throat clogged with them. She’d been bossed around and tied up, ordered into submission and whipped, but never had any of the men she was with asked her not only what she wanted, but what she needed.
“A real spanking,” she whispered. “One that hurts. I want to feel your strength.”
One of his hands wrapped around her waist, and her hand instinctively flew back. He grasped it, holding her hand, a gesture that was at once intimate and assuring, pressing her hand, engulfed in his large one, into the small of her back as the first smack of his hand fell. Her panties were thin and his hand large; the sting from the single swat hurt more than she’d expected.
“Ow,” she said in a little voice.
“Too hard?” he asked, squeezing her hand in the small of her back.
“Noooo, no no no, please, Tony,” she said. “Not too hard. That’s perfect.”
Another sound smack jolted her, and now he was spanking her in earnest, his palm rising and descending, and the heat of each spank warmed her skin, beginning with a jolt of pain that quickly spread to warmth, and her clit zinged with each stroke…

Here's where you can get it...

Other Books in the Boston Doms series...

A bit about Jane Henry and Maisy Archer...

Jane Henry
Jane has been writing since her early teens, dabbling in short stories and poetry. When she married and began having children, her pen was laid to rest for several years, until the National Novel Writing Challenge (NaNoWriMo) in 2010 awakened in her the desire to write again. That year, she wrote her first novel, and has been writing ever since. In 2012, she became interested in the d/s lifestyle, and has discovered her love for writing romance with a d/s twist. With a houseful of children, she finds time to write in the early hours of the morning, squirreled away with a laptop, blanket, and cup of hot coffee. Years ago, she heard the wise advice, “Write the book you want to read,” and has taken it to heart. She sincerely hopes you also enjoy the books she likes to read.
Maisy Archer
Maisy is an unabashed book nerd who has been in love with romance since reading her first Julie Garwood novel at the tender age of 12. After a decade as a technical writer, she finally made the leap into writing fiction several years ago and has never looked back. Like her other great loves - coffee, caramel, beach vacations, yoga pants, and her amazing family - her love of words has only continued to grow... in a manner inversely proportional to her love of exercise, house cleaning, and large social gatherings. She loves to hear from fellow romance lovers, and is always on the hunt for her next great read.