Today I have Amelia Smarts on my blog with a glimpse into Corralling Callie!

I really like the look of Corralling Callie and can't wait to read it! 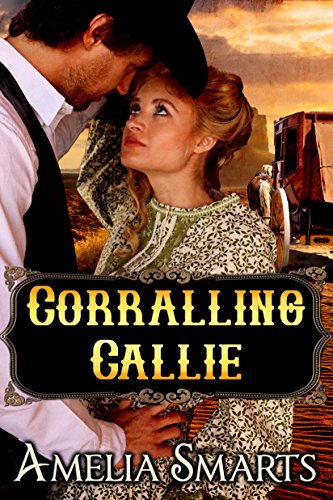 For eighteen-year-old orphan Callie Broderick, going west as a mail-order bride seems to be the only hope she has for a decent husband. But when she sets out for the gold-mining town of Sacramento with nothing more than the clothes on her back and a stagecoach ticket, she quickly discovers that the trip will be quite a bit different than she expected.

As a former soldier and an experienced coachman, Jude Johnson is used to difficulties and dangers of all kinds during the arduous journey west, but he has never had to deal with trouble like Callie before. Not being the kind of man to kick a penniless orphan off his coach, he puts up with the sassy, disobedient girl for as long as he can, but when Callie’s antics put the lives of his passengers at risk Jude is forced to take matters into his own hands and spank her soundly.

The stern punishment leaves her thoroughly chastened and promising to behave, and Jude soon realizes that when she puts aside her foul-mouthed, defiant façade, the real Callie is as sweet and kind as she is beautiful. As the days pass, he takes it upon himself to guide her, care for her, and give her the loving discipline she so desperately needs, as often as she needs it. But when they reach their destination, will he be able to give her up?

Jude had a good aim and could strike a small target from ten feet away with the end of his horsewhip every time. He practiced whipping often because it was important that a horsewhip be used with complete precision during every part of the journey. Aiming a folded belt at a girl’s upended backside from less than a yard away was decidedly less complicated. That was why each lick he gave her landed in a neat line from the fleshiest part of her bottom down to the tops of her thighs, not once lashing the same spot twice.

After the three promised licks, he removed his hand from her back. She hopped from foot to foot and reached around with both hands to grab her smarting backside.

He made a last-minute decision. “You’re getting one more lick for the lies you’ve told,” Jude informed her sternly. “Get back into position.”

“All right then. What about you knowing how to handle a whip on account of your pa owning more horses than everyone else in Missouri? Or being able to fix every part of a wagon?”

She hesitated for a moment, but then said with lift of her chin, “I told the truth about those things too.”

Jude let out an exasperated sigh. He’d hoped she would be forthright and clear her conscience. Out of all those lies, there was only one he could prove. He stepped a few paces away and removed his horsewhip from his hip. “Come here,” he ordered, as he flicked the handle with his wrist to uncoil it.

Callie trudged to him, eyeing the whip warily. He handed it to her. “If you can hit the trunk of that tree,” he said, pointing at a thin baby oak about ten feet away, “I’ll believe you about your whipping skills, and I won’t punish you for lying. You have three tries.”

Claimed by the Mountain Man – Jack’s stern chastisement and bold mastery of her body leave Nettie begging for more, but is she truly ready to give up her freedom to be claimed by the mountain man? http://amzn.to/2b5SymF

His Little Red Lily – Innocent farm girl asks repeatedly to be hired as an entertainer, but the saloon owner has different ideas about where a stubborn, disobedient little girl belongs. http://amzn.to/1TouqoF

Fetching Charlotte Rose – A proud young woman learns lessons in love and safety when a no-nonsense man sweeps her off of her feet… and over his lap. http://amzn.to/1U3FCJJ

I'm an author of romance novels featuring domestic discipline/spanking. Usually my stories involve a cowboy, and they always involve a man's firm hand connecting with a woman's naughty backside. It's important to me that I tell a good story in addition to portraying hot sex and discipline scenes. I write complex, flawed heroes and heroines who struggle and succeed in their journey to love and happiness. If you'd like to talk books with me, feel free to drop me a note at amelia_smarts@yahoo.com. Happy reading!