Who wants to read an excerpt from Surrendered on the Frontier? I know I do, luckily Jane Henry has brought one to my blog. Come and Join us!

So happy to have you here today Jane with your new release Surrendered on the Frontier. 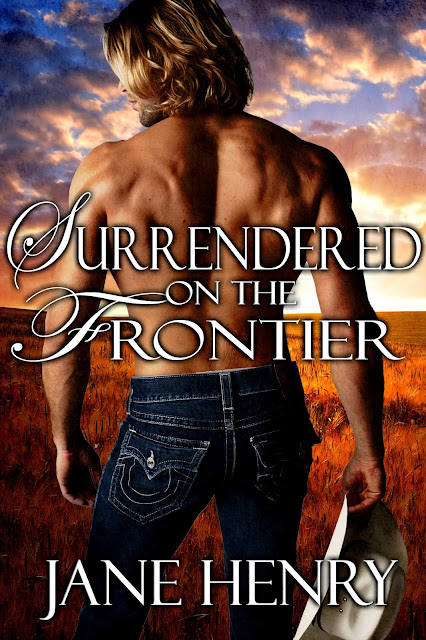 After the untimely death of her harsh, overbearing husband left her a widow at the age of twenty-three, Ruth Watson vowed that she would never depend on a man again, let alone submit to one. The hard world of the frontier is no easy place for a woman to make her own way, however, and when the tough, handsome Samuel Stanley takes it upon himself to look out for her, Ruth is ashamed to find that a part of her longs to surrender to his firm but loving dominance.

Though Samuel itches to tame the headstrong Ruth, he is able to hold himself back until she loses her temper and hurts her best friend. Seeing her riddled with guilt, he at last puts the beautiful little spitfire over his knee and spanks her hard and thoroughly. The stern punishment leaves Ruth not only properly chastened, but burning with passion as well, and when Samuel takes her in his arms she yields completely to his mastery of her body.

Samuel makes it clear that from now on Ruth’s impetuous behavior will have consequences, but in her heart she wonders if he will grow tired of protecting her from both herself and the dangers of the frontier. Can she bring herself to trust him to be the man she has always needed, or will her fears bring an end to their blossoming romance?

Publisher’s Note: Surrendered on the Frontier is a stand-alone sequel to Claimed on the Frontier. It includes spankings and sexual scenes. If such material offends you, please don’t buy this book.

. “I feel awful. Just awful.” The anger from earlier, the feeling of helplessness, and the weight that saddled my shoulders seemed insurmountable. I wanted to climb into bed and pull the quilt over my head. I wanted to never get out of that bed again. I deserved to be punished for such a wicked act against my closest friend, and the guilt I felt was consuming me. I covered my face with my hands, tears seeping through my fingers. “She's so good to me,” I choked, as the tears flowed. “She's with child, and  I struck her. What a wicked, wicked thing. I feel so guilty, Samuel,” I said to him. “I ought to be whipped for such a thing.”
His arms came around me then, and he pulled me into his chest. One large hand stroked my hair as he held me. “I wouldn't say whipped,” he said, and his voice was softer than I expected. “But little Ruth, I've long since thought that my hand across your backside would do you a world of good.”
I sniffled onto his chest as he held me. Just now, Pearl had told me Aaron would've taken her across his knee. She said it with a laugh, even. Would I feel better if he spanked me?
He'd told me he wouldn't raise a hand to me, because of my past.
But would he if I asked? I pulled back from him.
“Samuel?”
He nodded, smoothing the dampened hair back from my forehead.
“Would you...spank me if I told you that I knew I deserved it? And I wouldn't... be angry with you? I feel guilty,” I said. “I ought to be spanked.”
His eyes focused on mine a minute. He was contemplating. He finally spoke after what seemed a very long time.
“You want me to spank you?”
I closed my eyes and nodded. I couldn't look at him.
“Fair enough,” he said.
I swallowed, fear racing across my chest and a surprising jolt of arousal at his stern but calm demeanor. “Now?” I whispered.
He released me, pulled a chair from the table, placed it in the center of the room, and sat heavily, his large legs spread apart. I looked at his lap and wondered what it would feel like to lay across his knees like a naughty child. He would not make me. He would not forcefully pull me across his lap.
Samuel patted his knee. “Come now, little Ruth,” he said softly. “Come and lie yourself across my knee.”
He would not force me.
I would have to do it myself.

Other books by Jane Henry...

A Thousand Yesses: They are best friends...can they be lovers?

Begin Again, book one in the Bound to You trilogy: A desperate wife pledges her obedience to an online dominant.

Come Back to Me, book two in the Bound to You trilogy: Meredith and Paolo attempt a weekend of intense training to adapt to their new lifestyle of dominance and submission.

My Dom: Curiosity drives Heidi to yearn for a taste of her amorous neighbor's kinky pursuits.

His Submissive: Matteo agrees to be Hillary's Dominant...under certain conditions.

Her Protector: Can Tony be the Dom Tessa needs?

Claimed on the Frontier: Stern frontiersman Aaron Stanley is determined to protect his headstrong new bride, even if means taking her firmly in hand.

Jane has been writing since her early teens, dabbling in short stories and poetry. When she married and began having children, her pen was laid to rest for several years, until the National Novel Writing Challenge (NaNoWriMo) in 2010 awakened in her the desire to write again. That year, she wrote her first novel, and has been writing ever since. With a houseful of children, she finds time to write in the early hours of the morning, squirreled away with a laptop, blanket, and cup of hot coffee. Years ago, she heard the wise advice, “Write the book you want to read,” and has taken it to heart. She sincerely hopes you also enjoy the books she likes to read.