Today I have Jane Henry Visiting me with her new novel Complete Me!

I just love the cover of Jane's Book Complete Me (Bound to You Book 3)  and I'm pleased she's here to share an excerpt. 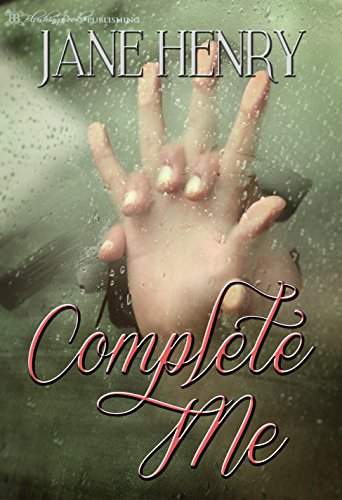 Meredith and Paolo are adapting to their new-found roles as dominant and submissive. Yet, despite their rekindled passion, everyday life must go on. How will they maintain their new roles long-term? Will people notice her submission to him? Would anyone ever find out she willingly lies over his lap for a spanking?
At the heart of it all, she longs to trust him. When Meredith finds herself terrified for her own safety, she knows there is only one person who will make her feel truly safe.

Though this is the third and final book in the Bound to You trilogy, it can also be read as a standalone.

DISCLAIMER:  This book contains the spanking of adult women and sexual scenes. If these offend you, please do not purchase this book.

He pointed wordlessly for her to go to the bed, and she stood, eagerly obeying him, fingering the cold metal, smooth as silk under her fingers. It felt sturdy. She tugged, and the pull of the chain on the back of her neck gave her goose bumps. So caught up in the moment, and the feel of her new, symbolic gift around her neck, she was unaware of him coming to the bed with her until he was already there, stripped.
He climbed up next to her, and she knew without him saying a word, that tonight would not be about tying her up, or putting her over his knee and spanking her to ecstasy. No, tonight was his claiming.
“You’re all mine, baby,” he whispered in her ear, pushing her down on the bed as he positioned himself above her, and she felt him hard against her thigh. His voice was husky with emotion. Dipping his head, he nipped at her shoulder, and she gasped, arousal pooling between her legs at the way his whiskers scratched her naked skin, his voice deep and just above a growl, his powerful hands holding hers by her side as his tongue flicked over the place he’d nipped.
Paolo’s mouth found hers, and one of his hands brushed one of her breasts, his kiss deep and pleasantly familiar, as she basked in the knowledge that she was his precious girl, and his alone. His hand released her breast and found its way to her collar, tugging and twisting so that she felt the sharp pull. He released it and resumed stroking his hand along the length of her body.
“You were a good girl tonight,” he said, before his mouth met hers again. She had been. This time, it had been easy. It would not always be so easy. This, she knew. But she also knew, now from her own experience, as well as from what she’d heard from Annalise, that the difficult times would make them stronger. The trials and tests would come, but each obstacle they overcame would fortify their bond. They would continue to build their life together, each and every day, as each would learn to meet the needs of the other.
Complete.
Meredith kissed him back, and he groaned as her tongue flicked in his mouth, and he ground himself against her hips. She marveled at the strength of him. He felt stronger now than he had decades before.
“Those biceps are something else, handsome,” she murmured.
“The better to spank you with.”
“And my, what powerful hands you have,” she said, her voice just a whisper.
“The better to restrain you with.”
“I want to run my tongue along the edge of those gorgeous shoulders,” she whispered, eyeing the breadth of his shoulders above her, the strength in his back, and the harnessed power he held above her.
“Have at it,” he chuckled, his own mouth dipping to her breasts, his teeth gently nipping one hardened nipple as her head fell back on the pillow and she welcomed the hazy arousal.
“I love you,” he murmured. Hundreds—no, thousands of times he’d said those words, but tonight, she truly heard them. They were no longer just a closing phrase on a phone call or a good night whisper.

Books one and two in the Bound to You trilogy:

Begin Again, book one in the Bound to You trilogy: A desperate wife pledges her obedience to an online dominant.

Come Back to Me, book two in the Bound to You trilogy: Meredith and Paolo attempt a weekend of intense training to adapt to their new lifestyle of dominance and submission.

Other Books by Jane Henry:

A Thousand Yesses: They are best friends...can they be lovers?

My Dom: Curiosity drives Heidi to yearn for a taste of her amorous neighbor's kinky pursuits.

Claimed on the Frontier: Her stern frontiersman demands obedience, determined to be as firm as necessary to keep his bride safe in a hard, dangerous land.

A bit about Jane Henry...

Jane has been writing since her early teens, dabbling in short stories and poetry. When she married and began having children, her pen was laid to rest for several years, until the National Novel Writing Challenge (NaNoWriMo) in 2010 awakened in her the desire to write again. That year, she wrote her first novel, and has been writing ever since. With a houseful of children, she finds time to write in the early hours of the morning, squirreled away with a laptop, blanket, and cup of hot coffee. Years ago, she heard the wise advice, “Write the book you want to read,” and has taken it to heart. She sincerely hopes you also enjoy the books she likes to read.

Where you can connect with Jane...