Jaye Peaches is visiting my blog today with her book 'To Know You'! 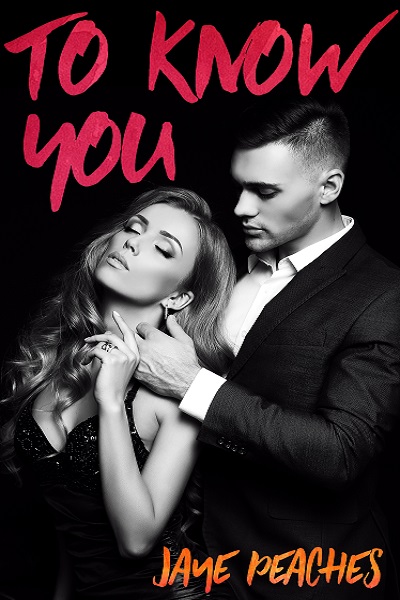 Today I'm lucky enough to have Jaye Peaches come and visit my blog. She's here to showcase her book To Know You. Here's the blurb...

And a couple of excerpts

I rested my back on the bed as he took off my stockings. He slowly rolled them down while snaking his finger behind. I giggled at the ticklish sensation. Sliding back up my torso, he leaned over me, placed his hands on either side of my head and pinned me down, not with his weight, but the intensity of his blue eyes. A little end of day stubble was visible on his chin.
“I’m thirty-one years old, I’ve had plenty of girlfriends, lovers or whatever you want to call them,” Jason said. “I work hard. Play hard. Such a life doesn’t foster long term relationships, especially not conventional ones.” He traced his forefinger down my cheek, and the soft caress ignited me further.
What did all that mean? Was tonight just a one-night stand? I was too fired up to query his comment.
“Sure, Jason,” I hadn’t said his name before then, now I relished the syllables—Jason Lucas.
He started with his lips, tongue, and fingers. They moved everywhere. Kneading, nibbling, squeezing, licking and oh my, kissing my neck. I touched his head and raked my fingers through his hair, enjoying the freedom to explore. His hair might be blond at the ends, but the roots were dark, particularly where the strands lay thickest and across his crown.
“There is no bald patch, Gemma. If that’s what you’re looking for.”
I flinched and snatched my hands away.
He was grinning, reassuringly happy. “I’m not contagious you know,” he said pleasantly.
I returned to my own sensual exploration. The second time, his muscular shoulders and arms warranted my attention. He obviously worked out—his biceps bulged and his pectorals were gorgeously defined. Yet, he managed to stay lean and trim, especially his waistline. All this stunning physique, on show for me, had been hidden away behind his suits and shirts. What girl wouldn’t find him heart meltingly attractive and he was beneath my hands.
He snapped my bra cups down and teased my nipples with his teeth. I groaned as he sucked each one in turn—hard—before circling his tongue around the hard pebble. With no subtleness, he eased his hand down under the front of my knickers and beamed at his discovery. I sucked in a lungful of air as he poked his fingertip inside me.
“You are one wet girl,” Jason laughed and with his nose following the contours of my body, he started to glide towards my juice soaked pussy, ready to investigate.
I giggled and attempted to shrug my shoulders. “Can’t think why!” I felt pumped with adrenaline.
Kneeling on the floor, without blinking, nor loss of fluidity of movement, he dragged my knickers off, and flicked them over his shoulder. I shrieked as he buried his head between my legs and fluttered his tongue at my swollen clitoris, lashing my exposed clitoris with his precise tongue. I wriggled and writhed, unable to hold still. He cupped my arse cheek and squeezed it, sending ripples of excitement across my butterfly filled belly. With a gasp, I let my surrender deepened.

I’d taken on a different persona, too—my sassy and self-assured one. She knew what she liked and had the experience to keep her advantage in the conversation. When it came to dictating my tastes, preferences and limits, he’d no say in the matter. As a good dominant he listened, questioned and acknowledged what he heard. Once all was agreed he was in charge and I would let him do as he wished. I created the a la carte menu—he would pick the dishes.
Had he liked my bolshie approach? He certainly smiled a great deal during the proceedings.
I’d told him no piercing, bloodletting nor electric play. Public humiliation was a no for me too. “I assume privacy is important to you, Jason,” I’d pointed out.
He’d smiled wryly. “Depends on your definition of public.”
Something told me I’d find out. I curled my feet up underneath my legs and we moved on.
“Nettles?” He raised his eyebrows.
“They make a nice soup I believe.” I tossed my hair over my shoulder.
He tapped the pen on the paper. “Ah, bloody, ah!”
I rolled my eyes. “Well, I admit, I sat on some for a few minutes, once upon a time.” I grimaced at the recollection.
“And?”
“It fucking hurt, what do you think, that’s what,” I paused. “I could try again.” I ventured with a little grin.
He smiled and marked the paper with a sweeping tick. “Good.”
“Why the keenness?”
“Very useful for training subs who like to masturbate without permission.” The smile turned into a smirk.
“I will endeavour to avoid that then.”
“The training or the masturbation?” He twirled the pen through his long fingers.
“Both perhaps,” I teased.