Guess who is has come to visit me today? B J Wane!

I am so happy to have B J Wane here to visit us today to tell us a bit about Returning To Her Master. Thanks for joining us BJ. 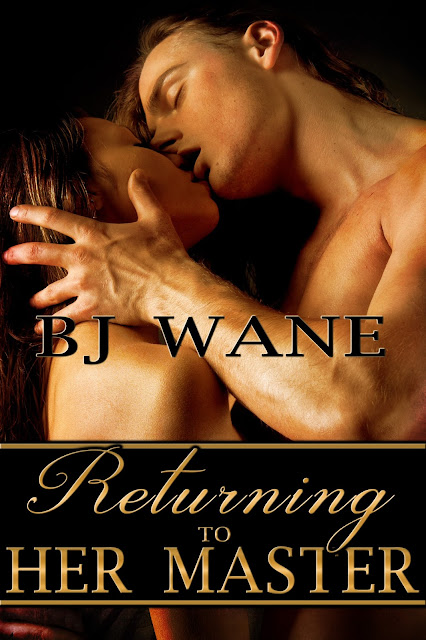 Thanks so much for having me.  I’m excited about reader’s responses to RETURNING TO HER MASTER.  Picking up where HER MASTER AT LAST left off with Marc and Cassie’s story, I have added over 4,000 words to the original version of this story in Make Me Yours as well as made significant changes to the plot.

Marc Taite is shocked when Cassie Edwards, the only girl he’s ever loved, suddenly shows up in the club room of his Colorado vacation lodge. Ever since she broke off their romance without explanation and refused to answer his calls, he has wondered what went wrong, and he hauls her upstairs, intending to spank her soundly and then get some answers. Their old passion instantly reignites, however, and instead of taking her over his knee he ends up taking her hard and fast.

The connection they once shared clearly still exists, but Marc has already lived through the pain of losing Cassie once, and he is determined not to let himself be hurt again. Desperate to prove that this time she is truly ready to belong to him, Cassie promises Marc her complete submission, and she soon finds herself on her knees with her bright red bare bottom on display as she begs him to claim her in any way he pleases.

Though he is reluctant to risk his heart again, when Marc discovers that a stalker has followed Cassie to Colorado his need to protect her quickly overcomes his hesitation and he takes it upon himself to keep her safe, even when that means punishing her sternly when she breaks the rules he makes to protect her. But when a misunderstanding sends her fleeing from him once again, will he lose her a second time?

“I’m not completely stupid,” she bit out, “except where you’re concerned.”
Marc saw Scott’s smile before he stepped away and pulled out his pager to let Jack and the others know they could call off the search and head back home. With slow precision, he advanced toward her, striving to keep his anger in check. She looked tired and strained, a reminder of how she must have been scared out of her wits out here alone for the past two hours.
“Before you explain that statement, tell me if you’re all right.” he asked in a softer tone when he reached her. “Here.” Handing her a bottle of water, he looked her over while she downed it, assuring himself she was unharmed.
“Thank you, and yes, I’m fine. I’m sorry I bothered everyone. I didn’t mean to get lost.”
“Nobody means to get lost, darlin’, but if you ignore the basic rules of hiking in these mountains, it’s bound to happen. Rules I believe I told you about before our hike the other day.”
Cassie wondered how far she’d get playing the ‘poor me’ act, then looked at his face and knew she may as well not bother. He looked well and truly pissed. Maybe if she explained he’d understand, but the thought of telling him she thought she meant more to him than she apparently did had her cringing in humiliation. “Can we go back now? I have a lot of work to do, that is if I can use your kitchen,” she said, hoping he’d let the rule thing slide.
“No, we can’t go back now. First, I’m going to show you how I deal with rule-breaking from my sub. Then, on the long trek back, you can explain yourself.” Grabbing her hand as she took a hasty step back, he pulled her to him, turning to see where Scott went. Always thinking ahead, his friend had already removed his belt.
“I decided you were too upset to mete it out, so I’ll do it for you,” he stated when Marc raised an eyebrow at him.
“You’re right.”
“Right about what?” Cassie looked from Scott and the wide leather belt looped over in his hand to Marc, a shiver of apprehension rippling up her spine as she imagined the sting from that leather strap.
“That I’m too put out with you at the moment to discipline you myself, so Scott will do it.”
“No. You can spank me later, when you’re not upset.” She tried to pull away from him, but his grip remained tight. While a part of her mind panicked over the thought of Scott using his belt on her, another part, the part she labeled her secret, slutty Marc part, was excited about the prospect. The erotic pain from her previous spankings always led to powerful orgasms, as did being observed. But this time would be for punishment and not with Scott watching, but meting it out. Before she could assimilate how she felt about that, Marc had her jeans shoved down and a hard arm wrapped around her waist as he bent her over. “Wait, Marc! Please!” She tried to struggle, but a hard slap on her bare ass put a quick stop to it.
“No, I will not wait. You took off alone.” The belt snapped across her buttocks and she yelped at the fiery pain. “And you didn’t stay within sight of the lodge,” he continued, reaching under her with his free hand and cupping her unfettered breast beneath her shirt as Scott smacked her again. “And you have explaining to do as to why.”
The belt stroked across her vulnerable buttocks again and she bit her lip as he continued to torment her, the slapping flesh snap of leather against her bottom echoing in the mountain air. Marc’s confusion over her reason for taking off had her wondering if she heard him wrong.
The new hope blossoming in her chest helped her accept her punishment and the accompanying pain. Her buttocks throbbed with the scorching burn and she knew right away she wouldn’t find any pleasure with this spanking. His hand on her breast soothed rather than stimulated and went a long way toward helping her bear the consequences of her actions. As if the humiliation of being bent over bare assed and punished by Scott wasn’t enough, guilt over the trouble she caused everyone ate at her conscience. Sitting wouldn’t be an option by the time the sheriff finished belaboring her butt.

Where you can connect with B J Wane...

And you can contact her via her email address...

bjwane@cox.net
Posted by Unknown at 12:00 AM