Corinne Alexander is here to talk about A Brush Of Violet!

I am so happy to have Corinne here today to tell us a bit about her new release, A Brush of Violet! She is also running a competition so don't forget to comment for a chance to win. 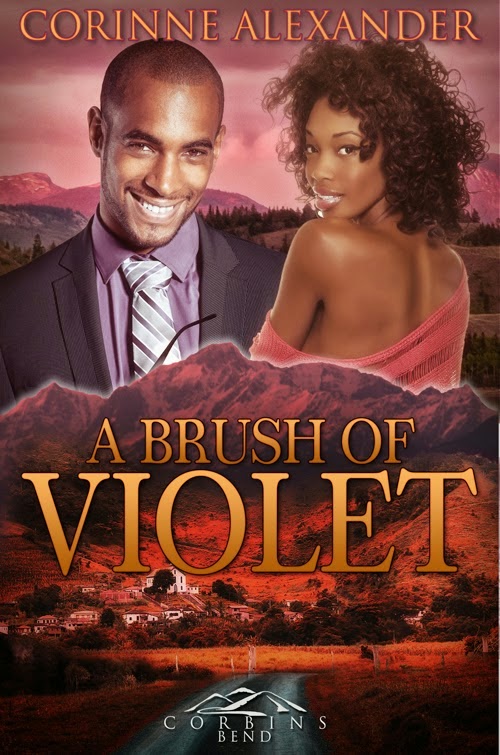 Sighing, Violet shook herself out of her reverie. Her independent nature was too at
odds with a relationship like that. Her mom had nipped that relationship in the bud before it had gone too far. Something like that could be great for Ever, but not for her. She remembered how horrified her mother had been when she found out that Violet had been “letting someone else tell her what to do, and a man at that” after she overheard them talking one day. She was sure her mom had picked up on the vibe between them as well. She was not going to let any daughter of hers submit to a man. The Harris ladies were strong women who made their own way in the world. The world bowed to them, not the other way around. Working hard to meet both her mom’s expectations and her own, she graduated college with her MBA landing a job in business mergers and acquisitions within a week from graduation. She knew her mother was right; yet she spent many of nights yearning for just that. The world around her snapped back into focus as Everleigh answered her question.
“I think it will be okay.” She nodded. “I wasn’t sure at all at first,” Everleigh confessed, looking a little forlorn, “but we have a plan for while he’s away, and I think it’s going to work out just fine. I have great neighbors who will check in on me, plus you’re here,” she said with a smile and a wink. “We have a schedule of nightly video chat sessions to stay connected and make sure I’m on track. To be honest, my plan is to stay as busy as possible the rest of the time,” she said with a sigh. Opting to change the subject, she asked with a mischievous look in her eye, “So when was the last time you had a man in your bed?”
They stayed up late laughing, teasing, and catching up, not going to bed until the wee hours of the morning.

High powered business woman, Violet Walker, has long left her artistic days behind. That is until her best friend, Everleigh Harris, invites her to Corbin's Bend for an art festival. What Everleigh doesn't know is that Violet hasn't been able to paint a single brush stroke since turning her back on her submissive desires and spanking needs in college. When she meets charismatic and drop dead gorgeous Charles her world is turned completely upside down. Will Violet, overworked, burnt out, and in denial of her deepest wants and desires, be able to surrender when love knocks on her door?

Charles Robinson, President of the discipline Board in Corbin’s Bend and longtime resident, adores the community he lives in and the freedom it provides for all who live there. Raised in a traditional family; love and discipline are a way of life for him. There’s nothing he wants more than a marriage just like his parents where spanking and romance go hand in hand, even if that means holding out for true love. Is Violet just the kind of woman he’s looking for?

Will Violet risk the life she’s built for herself in blood, sweat, and tears for the undeniable connection she has with Charles, the utter bliss and contentment she feels when she’s over his lap? Can Charles convince Violet she really can have it all? Will this trip be just what she needs to rekindle all that she has lost since joining the corporate world?