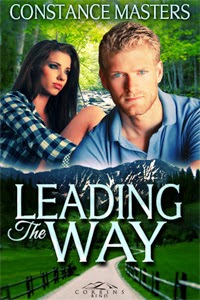 When her husband and the board of Corbin's Bend discovered their indiscretions, Erin and her friends found out what public discipline really meant. When the discipline led to a larger sense of security and more friendships than she could have imagined, Erin began to understand that following Zachary's lead truly was the way.

“Dinner is served,” Erin said proudly as she laid the platter with her impressive fish next to the bowls of mashed potatoes and green beans. The girls clapped and Zach looked on with wide grin.
“That looks spectacular, honey.”
It did look spectacular, even if she did say so herself. She’d poured the sauce all over the entire dish and it positively gleamed. “Would you like to serve?” she asked Zach.
He stood up and scooped portions on to everyone’s plate. The family said grace and they started. Erin watched everyone’s faces expectantly. Zach’s face was stoic as he chewed carefully. Avvy said nothing but she wasn’t even chewing. She just held the food in her mouth. Jordan was the first one to give her honest opinion. She spat her offending mouthful back on to the plate.
“That is so gross,” she said, dry retching for full effect.
Erin’s eyes filled with tears and popped her fork full in to her mouth to see what was wrong with the food. She carefully picked up her napkin and emptied the contents of her mouth. “Don’t eat it,” was all she said, standing and taking the platter with her.
“I can call a pizza,” Zach said.
“Do what you have to, to feed your children.”
“Honey, I’m sure there was just a small mistake with the recipe.”
The girls were wide-eyed. “I’m sorry I said it was gross, Mommy,” Jordan said. “It just tasted a bit like medicine.”
“That’s nice of you to say, honey, but you were right the first time, it was gross. Why don’t you two go play while you wait for the pizza to come.”
“Nice one, Jordan. You almost made Momma cry.”
“I didn’t mean to.”
The voices disappeared into one of the bedrooms and Erin burst into tears. “I have wasted the entire day on this! I spent a lot of my food budget on the ingredients and did everything the recipe said!”
“It’s okay, Erin, you tried.”
“Well I can’t serve ‘trying’ up to a bunch of people on Friday, can I?” She thumped her foot down on the trash can foot lever to open the lid and it bounced, just as she heaved the contents from the platter into it. It landed on the closed lid with splashes of the poison sauce going everywhere. “Oh for fuck sake!” she shouted into the cabinet door as she banged it open and shut in frustration before bending to wipe the cabinet door. Zach was behind her in a second and the giant wooden spoon clapped off her bottom.
“I never want to hear that word in this house again. Do you hear me?”

Have you ever got yourself in a tizzy about visitors? The house that we consider clean enough for ourselves and our loved ones to live in suddenly seems like a filthy disaster area when visitors are coming. The food that we serve everyday gets cleaned off plates with nary a complaint but when other people are coming, you feel this urgent need to become a michelin chef. Trying to learn how to cook complicated dishes very rarely works, especially while trying to scour the house and be a mother and wife.

I hardly ever cook from a cookbook and if I do, I substitute nearly everything in the recipe anyway, so of course the recipe doesn't turn out looking anything like it does in the picture. Erin's problem was a little different. Determined to make a good impression and  cook the best plate at her pot luck dinner party, she decided to try out a spectacular fish dish. She followed the recipe perfectly, still things didn't go according to plan.

There's only one way the tizzy is going to end, badly. Either it will fester and grow until the stressed person explodes, hurting everyone and everything in their path. Sometimes they need someone to stop them before it gets to that point.

Zach couldn't understand all the fuss. He loved his wife's cooking and so did the girls. Knowing it was important to his wife, he was as supportive as he could be. There was a limit though. He'd put up with Erin's escalating attitude for days. Her party craziness was taking on a life of its own. The day she cooked the fish, Erin seemed calm. He hoped this meant she was over her stress but as he secretly suspected it was the calm before the storm. When a word came out of his wife's mouth that should never be said in a house with children, accompanied by flying pots that she tossed into the sink, he decided a short sharp reminder was in order. Kitchen utensils weren't just for cooking and throwing.

Constance Masters is a 54 year old wife, mother and grandmother from Australia. She specialises in spanking romance and has nine published works. Leading the Way, her Corbin's Bend novella will be her tenth. Her work is mostly romance with a little hint of drama and a large slice of humour. She likes to find the humour in everyday life.

a Rafflecopter giveaway
Posted by Unknown at 12:00 AM