Maddie Taylor, Sent to the Dungeon for Being Naughty!

Hi Maddie! So nice of you to find time to come and talk to us today.

Thank you so much for inviting me. This is my first blog spot and I am very excited.

You have two books published so far is that right?

Yes. I have 2 books in a planned 6 book series called Club Decadence. My debut book was Captain My Captain and came out in March. You Said for ever is book 2 and followed at the end of May.
I also have 3 more accepted for publication by Blushing Books Publishing.

I believe you ran into a little bit of trouble with censorship. Would you like to tell us what happened?


Oh yes! Captain My Captain was flying off the virtual shelves at Blushing Books Publishing and at Amazon. I was thrilled. I had heard that new authors were lucky to sell 500 copies of a debut novel and mine had sold twice that many in just a month. I even hit the Amazon’s Erotica top 100 at #72. I about freaked I was so excited.
Then, along came book 2 suddenly my sales rankings started to drop sink like a brick. I went from a ranking consistently between 1200-3000 in May to 100,000 in June. I couldn’t figure out what was happening and why.
Fortunately, Bethany, my very wise publisher over at Blushing Books figured out the problem. My second book had been tagged as ADULT. At the same time that same censor (I’m not sure what else to call the busy bee at Amazon) went back and tagged Captain as ADULT, too. The problem we found out was the cover art was too sexy and suggestive. Here they are: 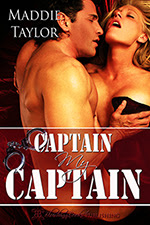 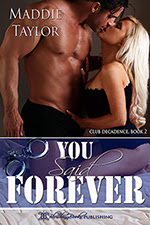 If you ask me, Book 1 is so much racier than book 2 and it passed through on release without any problems. It just goes to prove that there is no rhyme or reason to what gets tagged and what doesn’t.

Can you even tell why they tagged it as ADULT?

I had to look really close, too. See her hand down his pants? Well its actually her fingers in his waistband. That prompted the Amazon prude, I mean the nice person working at Amazon, to look at Captain and the “O” face got me the same treatment as well. Instant adult tag. Go directly to the Amazon Dungeon for naughty authors, do not pass go, etc.

Let me take a minute to explain the Dungeon. Unlike the dungeons in my novels,the Amazon version is no fun for an author. Once a book is tagged it is blocked from all those helpful tools on amazon like recommendations to readers, customers who bought this item also bought, and in the search bar you have to type the authors name and the title of the book to find it. Just typing Maddie Taylor brought up no links to my books.
It was very frustrating. And to make matters worse, the author and publisher are never even told when the book gets tagged that way. Some other authors and publishers have blogged about this as well. You can read more at http://disciplinedwriter.com/?cat=3

So now the problem has been identified it's full steam ahead. Why don't you tell us about Captain, My Captain.


Yes. You Said Forever’s cover was altered very slightly by raising the banner which hides the naughty hand. 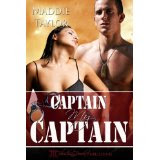 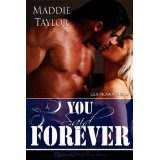 Captain had to be changed entirely. How do you get rid of the “O” face and the hand on her breast? So here is the new cover. It is nice, but I wanted hot, sexy and steamy like my H/h in the book.

I really loved the first cover and was very disappointed. It was my first book and very personal for me. Fortunately, the original cover is still available on www.blushingbooks.com. And even http://www.barnesandnoble.com/w/captain-my-captain-maddie-taylor/1115098203?ean=2940016749273 which is more proof of a widely varying industry standard.


My series is about a group of US Army Special Forces soldiers aka Green Berets. They are strong, sexy dominant men who are looking for their one, their special submissive. In Captain My Captain, the hero is Tony “Cap” Rossi. He commands the elite A Team of Green Berets through years of war in Iraq and Afghanistan. The book begins when they retire and his men follow their Captain to San Antonio, Texas to join him at the start up of a private security business. There is lots of danger, intrigue, and bad guys operating through a Mexican drug cartel.
As a side business, the six of them open a private nightclub and you guessed right, it is a BDSM club. So we get to watch these sexy men work and play. And do they ever play.
Captain My Captain is a love story. Cap finally claims Megan, a girl he has loved for 15 years. He has kept his distance because he didn’t think it was fair to claim her when his first priority was his job; a dangerous job that kept him abroad for months and years on end with no guarantees he will return. But when he comes home for good, the gloves are off. And so are the bras and panties. LOL There is lots of spanking, both good girl and bad girl spankings as well as Cap introducing an eager Megan into the BDSM scene.

Do you think you write much of yourself into your characters?

Yes and no. Yes in that I think the sass and humor is all me. I also like to play. I have been married to my beloved for over two decades and have found that you have to play and be happy. Life is too serious much of the time.

The no part is that I know that my heroine’s are much braver than me. It is fantasy after all but I’m sorry 20 swats with a Lexan paddle would have me yowling for mercy, long before Megan ever cried uncle.

What made you choose to write Spanking Fiction?

That is my kink. I have always fantasized about it. Even as a child, playing dolls with friends the naughty girls got spanked. It’s funny though, because there was no corporal punishment for me as a child. Other than two years of Catholic school, but that’s a whole other story.
I wrote about my feelings on the subject in You Said Forever:


… A spanking had an oddly calming effect on her that often lingered for days, plus she loved the aftercare. So, she often antagonized him to get the spanking she knew she needed. As a college educated woman, this seemed counterintuitive. Why not just ask for a spanking or go straight to the aftercare? She had tried to research the psychology behind her need for discipline, but had never come up with a convincing theory. She’d had a happy childhood with loving parents; no abuse, neglect or even any drama. When she’d asked her experienced Dom about it he said; “Everybody’s wired differently, baby. No need to wonder why, just buckle up and enjoy the ride.”

What is the thing you find hardest about writing this genre?

My mind is switched on all the time. I get ideas constantly in the car driving, in the middle of the night, and in the shower. I get a lot of ideas in the shower <blush>. When I get an idea I have to write it down. So I have scenes written on scrap paper in my car on napkins or I just pull out my laptop and start writing.
The hardest part is learning the business of writing, not the actual writing or the genre. I have learned to use proofreading soft wear because I know typos drive readers crazy. I have also learned to phone friend and send her my story before its submitted. Sometimes a different set of eyes can tell you what works and what doesn’t. And see what your eyes miss because your brain is filling in what you wanted to write not what is actually on the screen.
Can I give a big thank you to my beta readers L.A. Cloutier and just recently Dinah McLeod? They both helped me on my most recent submissions. L.A. has been a godsend. As a new author we have teamed up to share thoughts, ideas, etc. And of course, Victoria my editor over at Blushing Books is wonderful. Her patience and feedback has been invaluable.

What's next for Maddie Taylor?

So many things. How much time do we have? <Giggle>
A prequel to the Club Decadence series called; Faithfully. It will be offered as a Kindle Select which will be exclusive to Amazon for 90 days after its release. During that time it will be offered for free for up to 5 days. Otherwise it will be at a great low price. I am hoping that it will give readers a taste for more Decadence. 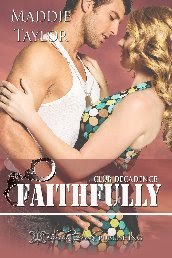 Little Light of Mine, Book 3 will be released sometime after Faithfully. It is Dex and Elena’s story and has some very heart wrenching scenes like You Said Forever did. Oh and Dex is a master with the single tail. I think fans will eat up The Club’s sexy Master Dom with a spoon.
I also have a Victorian spanking romance titled “Surrender Your Grace” that’s in the works. My first venture out of my contemporary comfort zone that I hope everyone will enjoy. Want a teaser? Can you say birch rod? Ouch.
Oh and The Gift, which is currently exclusive to Bethany’s Woodshed right now. You can check out chapter one for free at www.herwoodshed.com. Or it will be released on www.blushingbooks.com and Amazon this fall.
And finally, I have a Medieval time travel in the works as well.
As you can see, my busy brain is full of fantasy that I just got to find an outlet for before I kill my poor exhausted husband.


Lastly, five quick questions so we can get to know you a little better.

The Following. So dark and twisted. I love to hate Joe Carroll but love to love me some Kevin Bacon.

I had to stop and think about that one there are so many. I have it… My son’s best friend (an adult) walked in the back door when I had a very inappropriate video playing on my laptop. I couldn’t get it to stop as luck would have my accursed laptop froze up just then. The oohs and aahs just echoed through the room. Well after that we acted like nothing even happened. That was over a year ago and I still see him several times a week and we have never spoken of it. He doesn’t know I write about that kind of thing. It would melt a few circuits in his 22 year old brain.
Hey! I was doing research… really!


There are so many. But in this genre, I’d have to say Cherise Sinclair. I fell in lust with Master Z in the Shadowlands and have gone back to visit him many times and always leave with damp panties. I’m such a naughty girl.
I just had to have a club full of Doms of my very own. So thank you Cherise for inspiring Club Decadence.

When you were little what did you want to be when you grew up?

A lawyer. HA! Did I veer off course or what? I’ve always thought corporal punishment for offenders would be highly effective tool in our legal system. If it works in some marriages its worth a try on those DUI repeat offenders. I’ll even lend the bailiff our paddle.
Maybe I’ll write a book about that.


Thanks so much for coming to talk to us today Maddie. It's been fun and very informative.

Thanks for inviting me Constance. It was fun. Thank you also for reaching out to a new author with a friendly welcome, a sincere offer of advice and a wonderful platform to share my thoughts.