Today is the day of the week where Saturday Spanking bloggers post eight sentences of spanking fiction. Today I’m continuing from where I left off two weeks ago with Double Trouble, the sequel to my first novella Becky’s Last Chance.

I missed last week so just this once I’m going to cheat just a little just a bit so I can set the scene for next week. Hope you don’t mind.

When we left the story last time, Becky and Kendall had been caught and were heading home with Ryan and Mike to face the music.

While the girls are showering, the neighbour calls over and lets Ryan in on some of what happened the night before. 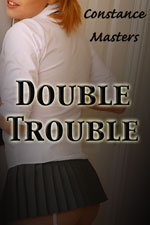 “Hi,” Kendall said sheepishly. “I feel a bit better now.”
She looked a lot better, if somewhat younger. She hadn't bothered to reapply her makeup and with her hair pulled back into a high ponytail she looked like a kid, Mike thought. “Uh huh. Maybe you'd like to tell me what on Earth went on while I was away,” he said.
“Um... not so much,” Kendall said with a nervous grin.
“Let me rephrase that then. What the hell happened while we were away?” Mike barked.
Kendall jumped. Mike looked serious and he obviously wasn't budging until he got an answer. She didn't get a chance to answer though before Ryan flew through the kitchen and up the stairs.
“Let the fireworks begin,” she said dejectedly.


Becky nearly jumped right out of her naked skin when the door bounced just about off the hinges and Ryan stood glowering at her from the doorway. He was clearly furious.
Becky felt sick. She wasn't scared. She knew that Ryan would never touch her while he was so angry. The fact that her time for explaining had arrived though, hit her like a ton of bricks.
“Where's the new car?” Ryan asked.
Becky promptly burst into tears. “Not here,” she wailed. “I tried to tell you, you wouldn't let me.”
“Tell me now,” Ryan said through gritted teeth. He didn't give a damn about the car, well he did but not as much as he cared about his wife, which was why he'd told her not to touch it until he got back. He hadn't told her once, he'd told her many times, and she'd promised.
Becky stood there naked, big burning tears coursing down her cheeks. No matter how hard she tried, she couldn't make herself form the words.
Ryan reached over and turned off the water and wrapped her in a towel before leading her into their room. He sat on the bed and sat her down beside him.
“You have to tell me,” he said as calmly as he was able. Images had flashed through his mind: of the gate, of the state the girls were in when they found them wandering down the road. The information John had given him had brought all of the pieces of the puzzle together. Still he wanted to hear it and he wanted to hear it from Becky's mouth.